A cooker hood is a long-term investment for your kitchen, so you'll want to pick one that not only does its job well but looks good, too.

Some cooker hoods can make a lot of noise yet be ineffective. The best will work quickly and quietly, eliminating moisture and odours, and stopping grease from settling on your kitchen surfaces.

Read on to find out more about the key features to look out for when shopping for a new cooker hood, and see a few of our Best Buy recommendations.

These are just a few of the best cooker hoods we've discovered in our testing. A Best Buy cooker hood should eliminate steam and smells quickly and efficiently, without making a racket.

This high-end chimney cooker hood pretty much aced all our tests. It comes with an app so you can control it using your smartphone and has plenty of features that make it stand out from the crowd.

Already a member?Log in

There are several types of cooker hood to choose from. Not all retailers categorise them in the same way, but we've summarised the main types below.

If your cooker backs on to a wall, you might want a chimney-style hood – particularly for larger cookers, or cookers that are located where wall cupboards would look out of place.

If your kitchen has a minimalist look, then a downdraft extractor might be tempting.

Island hoods – also called freestanding hoods – are large and can be very pricey, so take this into account if you're designing a new kitchen and deciding where to locate your oven and hob.

This is the original type of cooker hood, and these models are sometimes referred to as conventional hoods. 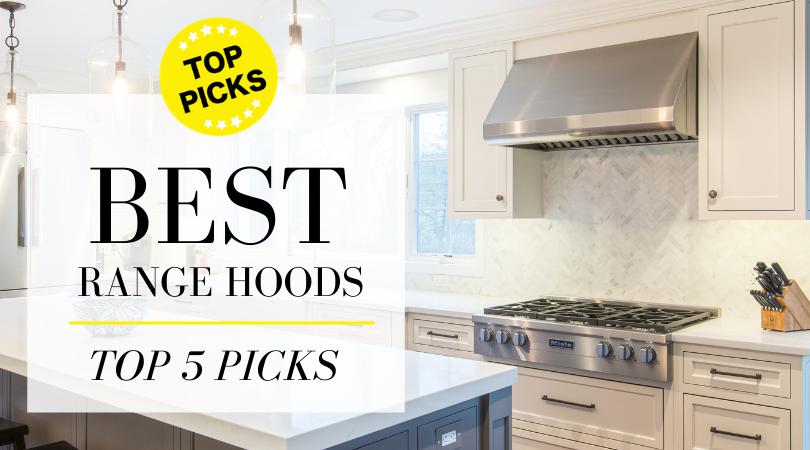 Installing a new kitchen along with your new cooker hood? See our guide to the Best and worst kitchen brands.

Cooker hoods aren't terribly complicated, but there are a few key features that can be useful to have:

What size cooker hood should I buy?

The ideal cooker hood width will correspond to the size of your hob and you'll probably want to match these up.

The most common cooker hood width is 60cm, which is suitable for standard-sized hobs. Also common are 90cm wide cooker hoods. You'll find that brands will often release the same cooker hood style in 60cm wide and 90cm wide versions.

You should choose a cooker hood that is at least as wide as your hob. This will help its extraction performance as air rises and is funnelled into the cooker hood's air ducts. If smoke billows past its sides, it'll have to suck even harder to try and clean the air.

Alternatively, if you buy a cooker hood that is wider than your hob, say a 90cm-wide cooker hood for a standard-sized 60cm wide hob, you can expect slightly better performance. Cooker hoods that exceed your hob in width will be able to catch more rising steam and clear the air more easily.

However a mismatched cooker hood-hob combo often isn't practical. Space and cost can be major considerations. If this is the case, you're best off starting with a size that matches the size of your hob and buying a cooker hood with a performance that's proven to impress.

Not sure you have the space for a cooker hood? See our guide to the Best venting hobs - hobs with built-in extraction capabilities.

Do cooker hoods have to be vented to the outside?

No. You can either set up your cooker hood to extract air through a duct to a vent in your wall, or use it in recirculation mode. This is where air passes through carbon filters before being recirculated back into your kitchen.
We test all cooker hoods in extraction mode, as it is a more effective way of removing steam and smells.

What filters do I need for my cooker hood?

All cooker hoods have grease filters – these capture grease as it rises from your hob, preventing it from settling on kitchen surfaces and leaving hard-to-remove residues.
These days, grease filters are usually made of aluminium or stainless steel, although you do still come across some made of a fleece material or paper. To keep the grease filters clean, you'll need to wash or change them regularly.
Metal filters are washable – they're easy to remove, as they clip in and out of the underside of the hood. They are usually suitable for dishwashers.
Fleece or paper filters will need replacing every few months, depending on how much frying you do. Some hoods come with a handy saturation indicator that lets you know when the filter should be changed or washed.
Removing a greasy fleece filter can be a messy job, so if you don’t like getting your hands dirty, choose a hood with metal grease filters. You’ll be able to get replacement filters from your hood manufacturer – make sure you’re specific about the size and type that you need.

How much do I need to spend to get a good cooker hood?

The cheapest types are usually visor style, integrated (built in) or canopy-style hoods that are designed to fit over a four-ring hob or cooker.

Many of these are available for less than £100, but some are much better than others, and some hoods at this price are not powerful enough to do a decent job of extracting steam.

You can find chimney-style cooker hoods for less than £100 too, but it's easier to find a good one if you have £300 to £500 to spend. We find that Best Buy canopy cooker hoods start from around £300, though larger, fancier models can be much pricier.

If you're looking for a cooker hood big enough to be fitted above a 110cm-wide hob or range cooker, you'll find plenty of chimney-style hoods to choose from.

Features to look for on cooker hoods in this price range include three power settings, an additional power boost, and the option to set the hood to switch off automatically after a short period.

If your cooker is on an island, or you want a minimalist look, you're likely to end up paying more than £400 for a large island hood or a downdraft cooker hood.

Find the best model for your budget using our in-depth cooker hood reviews.

Can I buy a quiet cooker hood?

The best cooker hoods we've tested aren't much noisier than the humming of a refrigerator; the worst can sound four times as loud.

If you like to chat or listen to the radio while you cook, or if you often eat in an open-plan kitchen, we'd recommend you choose a cooker hood that scores four or more stars in our noise tests.

Check out our cooker hood reviews to discover which ones are quietest.

Cooker hoods can be expensive, space-consuming and difficult to install. For this reason, some choose to simply open their windows while they boil and fry. This age-old method isn't the worst idea, but it will leave odours, steam and airborne grease to settle in your kitchen. And in the winter, it'll sap your heat and leave you shivering while you cook.

And don't forget about lingering odours either. The scent of dinner is welcome a first, but it will overstay its welcome without good ventilation.

Cooker hoods are purpose-built to absorb the unwanted by-products from cooking and they're positioned in the best way to capture and remove steam, grease and odours. A window or dehumidifier away from the hob won't capture as much steam, and for odours and grease, they won't do much good.

Cooker hood manufacturers have to comply with stringent requirements to ensure that their products are sufficiently fire-resistant in your kitchen.

We test every cooker hood to the same industrial standards manufacturers have to follow. When we find a cooker hood that fails these tests more than once, we name it a Don't Buy.

Read our Don't Buy cooker hood reviews to see which models to avoid because they failed our fire safety tests.