Air Fryer's popularity peeked in 2010, but the healthier-frying kitchen gadget's mass appeal has undoubtedly endured. In fact, air fryers were on of the most popular gifts this year. But you’re still wondering what it is, allow me to further explain to help find the best air fryer for the price and your specific needs. Basically, an air fryer is a compact electric convection oven, which means it’s an electric oven that distributes heat evenly throughout its cooking chamber by circulating air.

The effect of high heat evenly distributed in a small space creates foods that taste, well fried, but with far less fat and calories. Sure, you do add a bit of oil for many air fryer recipes, but you’re not sinking your mozzarella sticks, chicken wings, cauliflower steaks, tofu chunks, fries, and on it goes down into a hot bath of cooking oil.

Over the course of the past few years, both as a pretty avid cook and as a guy who does a lot of product testing for my job, I've tried out quite a few different air fryers, and I have come to know well that while all use that basic formula of hot circulated air in a small space, not all air fryers are created equal.

This is why, in just over a decade, the marketplace for air fryers has become rather cluttered with these plug-in countertop devices. If you're in the market to buy one of the best air fryers for the price, but don't know where to begin, I've got you covered. One of the air fryers below will be right for you, I’ll wager, assuming you like to cook healthier foods with less chance of grease fires and less mess.

If you’re looking for a basic, affordable, can’t screw it up air fryer, then you’re looking in the right place with this one. It has two dials—one for heat and one for timing. When both are set, the air fryer starts heating up and cooking whatever foods you have dropped into its rather compact 2.5-quart basket. Atop the air fryer is a basic guide to cooling temps and timing for some common foodstuffs (think veggies, fries, and poultry) and the nonstick removable cooking basket and crisping tray clean up with soapy water. If you’re cooking for two and you don’t want to think too hard about your cooking, this is your air fryer.

This 6.8-quart basket-style air fryer has a clever feature few such appliances with that removable basket have: a window. This lets you check on your foods as they cook without needing to pop open the cooking chamber, which causes heat to dissipate rapidly. And, that 6.8-quart basket allows for cooking entrees or sides plentiful enough for up to five adult diners, depending on the heartiness of appetites. The Dreo Pro Max air fryer has several preset programs that take the guesswork out of cooking, and of course, it can be custom programmed however you want.

This touchscreen air fryer has an impressive number of functions and comes with an impressive number of accessories given its low cost. It can be used as a rotisserie cooker, it has a fry basket, and it has multiple removable shelves, so you can cook everything from a whole rotisserie chicken to a whole range of appetizers to a pile of fries. Even better, you can keep foods separated from one another thanks to those shelves. And you can control all cooking functions via intuitive digital touch controls. Just note that cleaning off the wire shelves can be a bit of a situation—let them soak, or trust the dishwasher. 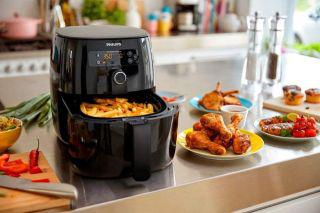 This air fryer lets you cook a large volume of food at once when you use the basket or you can cook two different foods kept separate from one another when you use the cooking rack insert. It’s a great choice for the home cook who wants to quickly prep an entrée and a side, especially thanks to the dedicated pre-heating function, something absent from many air fryers. It also allows you to precisely adjust the temperature in increments of five degrees.

If you prefer a basket-style air fryer but you want a larger capacity and more control than you get with a mere couple of dials, consider this one. And by the way, baskets are great: they let you quickly pop your food out and give it a stir or shake, then get it cooking again fast. The Proscenic T21 has many features you’d expect from such a device, like a nonstick interior, a rapid heat-up time, and easy programmability. One feature it has that’s rarely seen is the ability to schedule your cook time.

This air fryer is literally two air fryers in one. It has two completely separate cooking baskets, which is good for prepping different foods and is great for the household with differing dietary preferences or needs. Got a vegan and a veritable carnivore? Cook seitan in one basket, steak in the other. Got someone who avoids dairy and someone else who fiends after mozzarella sticks? Same story. Of course, you can always load up both baskets with the same foods and cook a bounty of eight quarts worth of eats at once, too.

Apologies to your oven, but you might not need it anymore once you have this large, multi-purpose air fryer. Its cooking chamber is capacious enough for a 13-inch pizza, a 10-pound chicken, multiple kebabs, multiple pieces of toast or bagel halves, and on it goes. Plus, unlike so many air fryers that max out at 450 degrees Fahrenheit, this one can match most conventional home ovens, hitting 500 degrees. Its dozen pre-set programs make cooking many foods a no-brainer, while an included internal digital temperature probe all but eliminates the chance you will over-or under-cook anything even if you set all the parameters yourself.

Scouted selects products independently and prices reflect what was available at the time of publish. Prices are accurate at the time of publication, but are subject to change. Sign up for our newsletter for more recommendations and deals. If you buy something from our posts, we may earn a small commission.

Read more at The Daily Beast.

Get our top stories in your inbox every day. Sign up now!

Daily Beast Membership: Beast Inside goes deeper on the stories that matter to you. Learn more.