You may have heard about air fryers and marveled at manufacturers' claims that they produce crispy foods with less fat than deep-frying and faster than a conventional oven. Is such a thing possible? We take a look at how the trendy appliance works to help you figure out if they're worth the money (and space on your already-packed countertop).

First of all, air fryers don't actually fry. Instead, the food goes into a perforated basket and the machine cooks the food by blowing hot air around it. The force of the air produces a convection effect that cooks and browns the exterior of the food in the basket. As long as the temperature of the air reaches more than around 320 F, breaded foods like frozen chicken tenders or unbreaded starchy items like french fries or tater tots, will in fact turn brown.

What Can You Cook in an Air Fryer?

One drawback to the air fryer is that you can't cook foods dipped in liquid batter, such as onion rings or fried chicken. The batter will simply drip through the holes in the basket and make a big mess, nor can you cook doughy foods like doughnuts or beignets. So you're limited to breaded or dry-seasoned items.

You're also limited in terms of portion sizes, but we'll get into that a bit later. Towards the end of this article we'll also discuss one particular task that air fryers do exceptionally well. But first, let's examine the purported health benefits of air fryers. 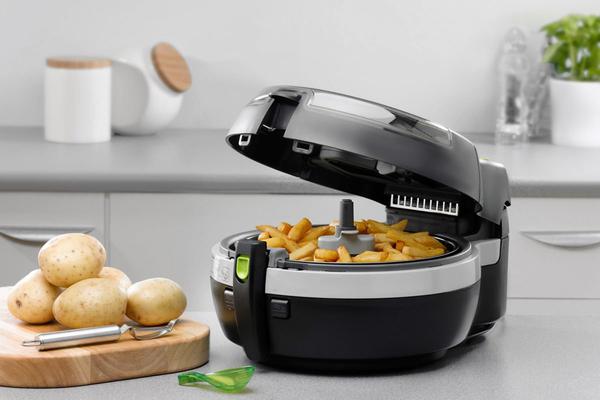 So let's look at that. For starters, we know that all cooking oils are pretty healthy. As long as you're not frying your foods in vegetable shortening or lard, there's nothing particularly unhealthy about the oil that goes in a deep-fryer.

Of course, oil has calories and while calories themselves are not unhealthy, if you're looking to cut calories, using less oil might be a good idea. Right?

Well, that depends. When cooked at the proper temperature (between 350 and 375 F), deep-fried foods actually absorb very little oil. In fact, a comparative study found that french fries cooked in oil had between 14 and 40 more calories per 4-ounce serving than baked fries, depending on the type of oil that was used and whether or not the fries had a seasoned coating.﻿﻿ For reference, 40 calories is about half a banana.

In other words, the amount of added calories from deep-frying is negligible. French fries are just a high-calorie food, whether they're cooked in oil or not.

Not only that, but the instructions for the air fryer call for tossing the uncooked fries in 1 to 1 1/2 tablespoons of oil before cooking. That's 120 to 180 calories worth of extra oil. Even divided into two servings, which is a typical batch for an air fryer, there's still just as much oil on your air fryer french fries as there are in your conventional deep-fryer french fries.

In any case, no one can plausibly claim that french fries are health food, no matter how they're cooked. So in a sense, touting the health benefits of an appliance designed to cook french fries (or chicken wings or tater tots) might not be all that meaningful.

What's more meaningful is whether the food cooked in an air fryer tastes good. The answer? It depends. If the food that goes in is tasty, it'll be tasty. But again, the issue with foods like french fries, chicken wings, and tater tots is never that they don't taste good enough.

The issue with those foods, to the extent there is an issue, has more to do with health, as well as convenience. Deep-frying might be the best way to cook conventional fried foods, but mucking about with oil isn't all that convenient.

So, let's look at the convenience. One issue with air fryers is their capacity. Because they work via the principle of convection, there has to be adequate space between the individual items for the hot air to flow evenly around them. Therefore, to get nicely browned food, you won't be able to fill up the basket. And that means cooking small batches at a time.

That's not necessarily a problem, unless you need to feed more than two people at a time. Also, depending on the food, cooking time can approach 30 minutes per batch (with frequent shaking of the basket to ensure even cooking), so hopefully those two people aren't super hungry (or at least have something else to snack on while they wait).

One task that air fryers seem to be well-suited for is reheating previously fried foods. Unlike the oven or the microwave, which will turn crispy things soggy, the hot, convection effect of an air fryer is just the thing to reheat crispy foods so that they stay crispy. Is that reason enough to own one? That's up to you. Even if its actual cooking capabilities might not amaze you, it's reassuring to know that there is at least one thing that an air fryer does well.

We Tested the Best Air Fryers That Make Cooking EasierFeatured VideoArticle SourcesThe Spruce Eats uses only high-quality sources, including peer-reviewed studies, to support the facts within our articles. Read our editorial process to learn more about how we fact-check and keep our content accurate, reliable, and trustworthy.
Prev Next