How many people in your life have extolled the infinite virtues of the air fryer recently? For me, the number is currently somewhere between seven and 10, so when I began testing the GoWise USA 5.8-quart 8-in-1 digital air fryer(opens in a new tab) my expectations were sky high. “It’ll heat up in minutes,” they told me! “It’ll change the way you think about cooking,” they said!

I’ll admit, I was doubtful that one 5.8-quart capacity device could so drastically change my life. But, I stand before you today a changed man — for the most part.

The GoWise USA air fryer is simple, efficient, and crisps up food nicely. It’s got a large enough capacity to feed three or four people, and the digital display is a chic touch, but a few small design flaws mean that it’s not quite as easy to use as it could be.

The GoWise Digital air fryer features eight cooking presets for everything from fries to fish, and can reach temperatures between 180 degrees Fahrenheit and 400 degrees with cooking times up to 30 minutes. Like most air fryers, the GoWise uses rapid air technology to cook food from all sides simultaneously which means food cooks faster and more evenly than in a traditional oven.

The GoWise air fryer is truly easy to use — reheating leftovers was a snap, and getting a nice crisp on homemade fries only took a quick 15 minutes of cooking time. I was happy to find that foods developed a lovely bright crunch with only a tablespoon or so of oil (maybe those air fryer evangelists were right), and the built-in alarm feature was helpful in remembering when to flip or toss foods for an even browning. As an added bonus, there was a distinct absence of that unpleasant manufacturer's smell that many air fryers have during their first few uses.

I was a bit surprised to see that the cooking time maxed out at 30 minutes, but because the GoWise air fryer’s convection cooking is so efficient, that should be enough time for most meals. At $90 the GoWise air fryer is a great value for its size, versatility, and ease of use. (Plus, it's often on sale at Amazon(opens in a new tab).) 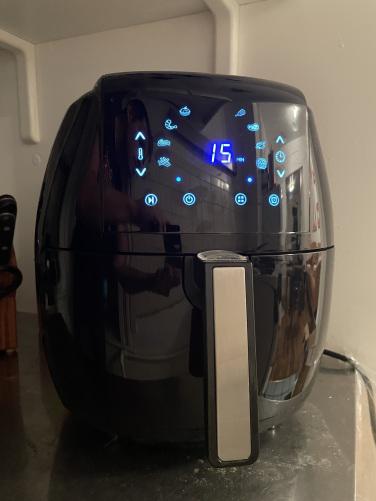 The GoWise air fryer’s nearly 6-quart capacity allows for more than enough space to cook dinner for four. In fact, the fryer basket is large enough to fit an entire chicken, and was wide enough that a large batch of fries or frozen chicken nuggets could all lay flat in a single layer for optimally even cooking. It was easy to cook plenty of food without overcrowding the fryer basket, which could result in less crispness on the food. When I cooked a couple chicken breasts over fingerlings, both cooked through evenly, and came out with a nice crisp browning. Although the potatoes took a few extra minutes, it was a good chance for them to develop some more browning without the chicken which may have slightly impeded cooking.

The generous capacity, though, means that this air fryer is a significant space commitment on your countertop. Although it’s not heavy, the bulky design would make it somewhat difficult to move back and forth between a cabinet and the countertop. At 12.5 inches wide, 13.5 inches deep, and 14.5 inches tall, the GoWise air fryer will likely be one of the larger appliances in your kitchen.

For an air fryer that boasts its digital display in its name, I have to admit I was a little confused when I first encountered the GoWise 8-in-1 air fryer with digital display. While the display features icons for each of its eight presets, they’re essentially decorative, as the only functioning buttons on the display are the power/start, pause/resume, menu, and alarm buttons as well as two sets of arrows to adjust temperature and cooking time. I assumed each of the preset icons would begin its specified cooking process, but instead the menu button is used to cycle through presets, while the icons flash to show your selection. Certainly not a dealbreaker, but a bit of a counterintuitive quirk that required me to leaf through the instruction booklet, and consequently feel a little bit foolish alone in my apartment.

Similarly, I wasn’t sure why one would want to use the pause/resume button — the power/start button begins the cooking process, and the oven automatically pauses and resumes when the basket is taken out and reinserted. Ostensibly this function would allow a user to adjust cooking time or temperature during cooking, but I didn’t see a scenario where that would be needed.

The display does, however, allow cooks to be very precise in their temperature and cooking time selections. While many air fryers feature knobs or dials which can be less exact, the GoWise’s digital temperature and timing display is a chic and effective way to input cooking information — plus, the entire display turns completely off when not in use.

Aside from some small quirks in the digital display, the only real downside to the GoWise air fryer was the drawer locking mechanism. In my experience a large part of cooking with an air fryer is flipping the food in the fryer basket for even cooking, or else opening the fryer drawer to check how your food is browning, so it was a notable issue that I ran into some trouble when reinserting the frying drawer. It regularly took me two or three tries to get the drawer to lock backin so that cooking could resume. Did it ruin my day? No. But, was it a small roadblock on the way to a seamless cooking experience? Well…a little.

Cleaning is a breeze

I’m happy to report that cleanup was as close to a pleasure as doing dishes could possibly be. The air frying technology allowed me to reduce the amount of oil I used in the dishes, which sped up the cleaning process. The interior drawer is finished with a non-stick coating, so for most recipes, a quick wipe down was enough to leave the fryer basket spick and span.

Since the drawer is removable, it’s easy to pour out any crumbs that may accumulate. The handle also has an eject button that releases the fryer basket from the drawer, so any tougher messes can be taken to the sink for a scrub.

Bottom line: Is it worth it?

To keep it short and sweet — yes. The GoWise 8-in-1 digital air fryer(opens in a new tab) is large enough to accommodate meals for four, relatively intuitive to use, easy to clean, but most importantly cooks food quickly and evenly. At $90, this model sits squarely in the center of the air fryer market, while providing above average, reliable performance.

Sure, the GoWise air fryer has some slight design flaws, but who among us doesn’t? At the end of the day a clunky locking mechanism and a counterintuitive button configuration don’t detract from the overall quality of the product. While this air fryer might not be a top of the line, luxury experience, it more than gets the job done, and is well positioned to become a kitchen staple for the prospective air fryer enthusiast.