Drew Barrymore has been a familiar face on screens both big and small for more than three decades, but now the celebrity is hoping to appear in a different setting: your kitchen. Barrymore’s Beautiful Kitchenware brand, which launched last year, has become known for appliances that are indeed a sight to behold on the countertop — as opposed to something you’ll want to hide in a cupboard.

As much is true for the Beautiful Tri-Zone 9-Quart Air Fryer, which hit shelves in time for the holiday season last year and sold out in less than 24 hours. The White Icing colorway is a particular fan favorite, but the air fryer is also available in chic Black Sesame and Sage Green for $139 direct from the brand or at Walmart.

With all the hype surrounding this fryer, we decided to see how it stacks up against the myriad other air fryers we’ve tested. Read on for a full breakdown of its performance, its pitfalls and who the Beautiful Tri-Zone Air Fryer might be best suited for.

Despite a sturdy construction and interesting concept, the inconsistent touch-activated controls of the Beautiful Tri-Zone Air Fryer were too much of an issue to recommend. 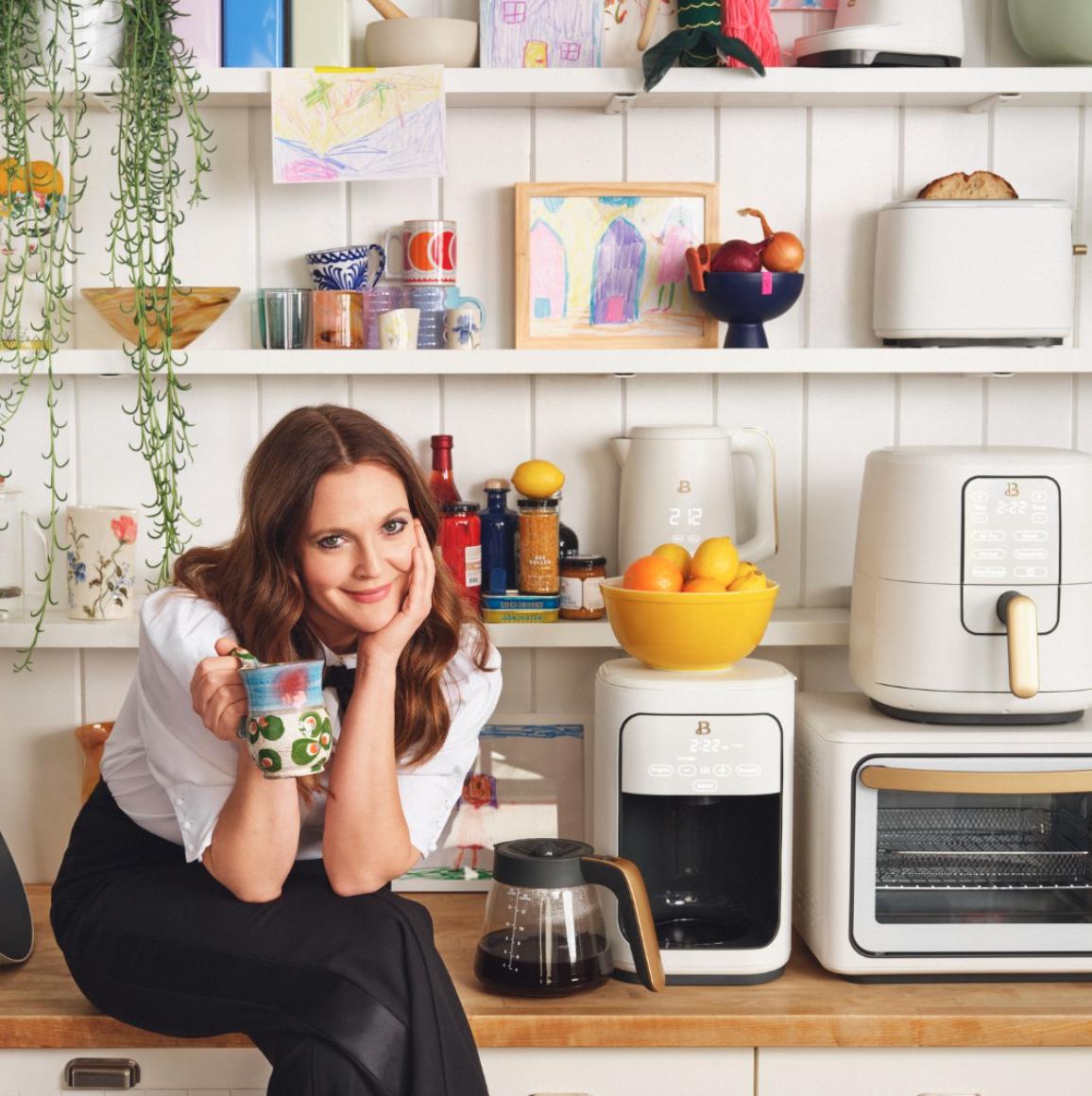 An eye-catching design stands out

The unique design of the Beautiful Tri-Zone Air Fryer allows you to easily choose between cooking a single item or two separate ones, thanks to a basket layout that can be bisected by a removable divider.

Out of the box, I was initially impressed by the overall appearance of the Beautiful Tri-Zone Air Fryer. Although it’s a bit bulky — you’ll need 11 inches by 15 inches of space on your countertop, about the size of a small toaster oven — its Sage Green color would be a refreshing addition to any kitchen, especially if you’re tired of black or stainless appliances. The backlit display controls are easy on the eyes and give a high-end, upscale feel to the whole unit.

Big batches are where this fryer shines

On paper, the ability to cook two separate items at the same time is convenient and time-saving — no one wants their food to get cold while waiting for a second dish to cook — but unfortunately this fryer doesn’t quite get it right.

Performance-wise, the Beautiful Tri-Zone Air Fryer produced great results during my testing. It was able to cook frozen french fries well, and along with my frozen shrimp, it created a light and crispy crust. The Brussels sprouts I cooked came out moist and crisp too, even when I used the tri-zone feature to cook them simultaneously with an order of shrimp. The large 9-quart basket could also easily fit a large item like a chicken or roast, making it a useful choice for those who plan on cooking for several people. I also appreciated how easy the nonstick components were to clean in my sink, and if you have a dishwasher, they’ll be safe in there as well.

Although the Beautiful Tri-Zone Air Fryer ultimately produced crispy, evenly cooked food — I tested all three cooking zones with french fries, breaded shrimp and Brussels sprouts — it wasn’t as convenient or hassle-free as I would have liked, especially compared to fryers that I tested previously. In addition to control panel issues that I’ll touch on later, the double-handled basket was a bit bulky and uncomfortable to use when using only a single section. I’m sure its 9-quart size will be convenient for cooking larger food items like a whole chicken, but the large basket and its dual-handle design lacks the mobility and control that comes with smaller, single-handle options. Being able to pull out, shake and dump out your cooked food with one hand is one of the most convenient features of an air fryer, and a big reason why I’m such a big fan of single-basket fryers like the Ninja AF101 Air Fryer or Dash Tasti-Crisp.

The Beautiful Tri-Zone Air Fryer was simple and straightforward to program, especially considering the relatively challenging tri-zone setup. (I’ve personally tested numerous air fryers that were more complicated to program than this one, and they had only one basket to worry about.)

The form-over-function approach is ultimately frustrating

Unfortunately, the touch-sensitive controls, although beautifully presented, were just not responsive enough to be used effectively. While there were times when the buttons responded correctly, more often than not they required two or three attempts to register my touch, and sometimes would take dozens of presses to work. If you were cooking dinner for your family, or just aren’t a very patient person, this could be seriously frustrating.

Even though there were some aspects of this fryer that were well made and designed, the usability of the control panel and the awkwardness of the double-handled basket make this air fryer difficult to recommend.

That being said, these button issues may have just been present in my specific model, and if you know you’ll be cooking large items frequently and will be able to take advantage of the large size more often than not, this fryer could be worth checking out.