The atmosphere is the protective air envelope around the earth. Air contains oxygen that we breathe and protects us from the harmful UV rays of the sun.Air is a mixture of different gases and is all around us. We cannot see it but it is essential for all living organisms. Atmosphere consists mainly of nitrogen (78%), oxygen (21%), argon (0.93%), carbon dioxide (0.03%) and other gases like helium, ozone, argon and hydrogen (0.04%). Air in the atmosphere has several critical functions that help in the sustenance of life.

Pure air doesn’t have any scent or colour. But classically air contains dust, pollen, spores, and other contaminated particles which are known as ‘air pollution. As far as the atmosphere is concerned, air has several critical functions that will help to sustain life.

What are the Important Uses of Air?

The importance of air lies hereunder:

The water cycle ensures that life around the planet receives the water it needs by replenishing lakes, rivers and other waterways and helping in irrigating parched lands.

Air is important for recycling of carbon that comes into the biosphere from fossil fuel combustion, the decay of dead animals, and the eruption of volcanoes. Most living organisms exhale carbon dioxide into the air during respiration. Plants utilize the exhaled carbon dioxide present in the air for photosynthesis, which produces oxygen.

Air contains carbon dioxide and other greenhouse gases that absorb infrared radiation released from the earth. This phenomenon, called The greenhouse effect keepsthe earth's surface warm which would not have been possible otherwise.

Air helps protect us from harmful radiations and celestial particles like the x-rays, cosmic rays, meteors, asteroids can be too destructive. Air also reduces the possibility of destruction by meteorites and asteroids.

People can hear sound only because air carries sound waves from one point to another.

Due to air molecules causing violet and blue wavelengths of sunlight to scatter, the sky appears blue.

Climatic phenomena like rain, snow, and sea storms are all attributes of air.

Below are the essential uses of air with brief explanation:

Air has oxygen as one of its key elements. It is vital for the sustenance of life on earth as all living organisms and plants depend on oxygen in the air for breathing in oxygen. There are many uses of air in daily life. In living organisms, oxygen is supplied to all the cells in the body through blood. Similarly, plant cells also utilize carbon dioxide in the air to produce food that we eat to get energy. 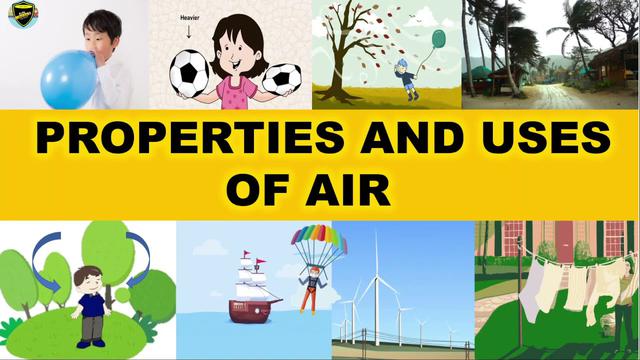 During conditions of extreme heat, the land surface becomes hotter compared to oceans or sea surfaces. The hot air on the land rises rapidly and the place is filled by the cool air coming from the ocean. This cycle of rapid movement of air is useful in maintaining temperature over land.

Monsoon is of critical importance as it provides for irrigation and thus, production of crops.This monsoon is aided by the winds which carry the clouds from above the oceans of the world. Thus, air plays an important role in the movement of clouds and its absence can cause drought-like conditions in some regions.

Parachutes and hot air balloons use air for mobility. Therefore, to land safely, it uses the function of buoyancy where hot air balloons travel up in the air using hot air as a medium. Air also enables airplanes to fly and travel from one place to another.

Air-filled tires, commonly used for land-based transport, reduce the friction between the tire and the solid surface, thus enabling automobiles to move faster.

Air makes transportation easier as it facilitates the smooth movement of airplanes. It is a common mode of transport globally across long distances. One can avoid obstacles through air travel. Several other living beings like birds and insects depend on air for mobility. Air also has several tiny living organisms called bioaerosols. They cannot fly on their own and depend on air for transportation.

Major cities are getting choked with pollutants, dust, smog, and chemicals preventing visibility and causing several health hazards. Air is useful in minimizing air pollution by spreading it across vast areas instead of clogging it at a specific place.

Some Examples of Combustion are as Follows:

Air is a natural resource and is available plentifully. It is an essential element of nature that supports life on earth. Air is equally important for living organisms for their survival just like water. Air is very useful and has much significance.

The significance of air is as follows:

Oxygen present in the air is one of the main elements for living life. All living things such as animals, birds, and human beings need oxygen for survival. Whereas, Nitrogen & Carbon dioxide is required for plants and their growth. The Oxygen present in the air helps in burning fuel which supports us in cooking food, in running industries, etc. as well as also helps in generating heat and so on. Thus there are other biological uses of air that also play a crucial role in our life such as; during respiration oxygen is inhaled into the lungs and then released into the bloodstream and oxygen is distributed in all cells of the body.