What's the Difference Between an Air Fryer and a Convection Oven?

What's the Difference Between an Air Fryer and a Convection Oven?

There is no actual frying going on inside an air fryer—that's because an air fryer cooks food via convection baking.

With actual deep-frying, your food is directly immersed in hot oil. The oil completely surrounds every inch of the food, so it gets uniformly crispy. With ordinary baking, your food gets less crispy, because baking cooks by surrounding your food with hot air and air is not as good a conductor of heat as oil.

How to Cook Frozen Food in the Air Fryer

What Is Convection Baking?

Convection baking introduces a fan to the interior of an oven, allowing hot air to be blown around and onto the food. The force of the air thus transfers more heat to the surface of the food, so that it produces more crispiness than an ordinary oven (but still far less than an actual deep-fryer).

So air fryers are, in essence, convection ovens. But that doesn't mean the two are exactly the same. Let's talk about what those differences are. 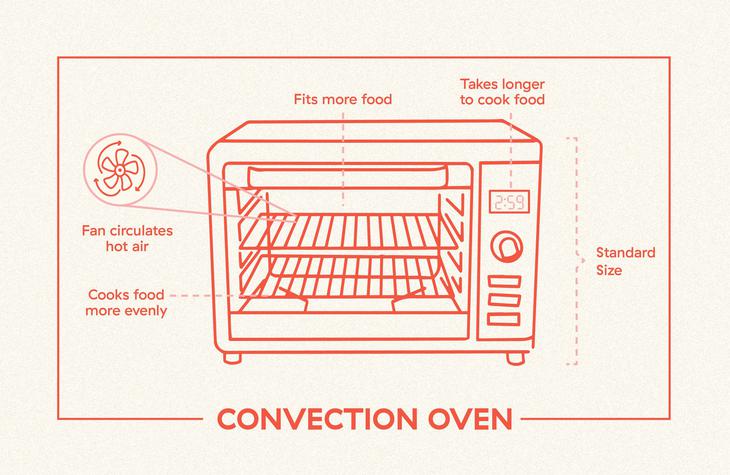 Note that although many oven ranges offer a convection setting, for this discussion, we're solely comparing countertop convection ovens with air fryers.

What Is a Convection Oven?

The motion of the air inside the oven is called a convection effect and it results in faster cooking by transferring higher temperatures to the surface of the food as compared with an ordinary oven. So it both accelerates cooking as well as enhances the browning and crisping of the surface of your food.

Like a toaster oven, a convection oven has an interior rack that will fit a sheet pan (preferably a perforated one to allow maximum air flow). Because it's wide, it allows for the food to be spread out on the rack rather than stacked in layers.

This is crucial, since stacking or layering food impedes the flow of hot air. Arranging the food in a single layer allows for even cooking all around.

What Is an Air Fryer?

Essentially, an air fryer is a smaller, more portable convection oven. Instead of being shaped like a toaster oven, many air fryers are tall, sort of resembling a coffeemaker. It has a removable bucket with a handle, and inside that bucket fits a removable basket. This basket is where the food goes. The bucket slides into the device, you turn it on, and it starts to cook. The fan is situated overhead, above a heating element.

Now, because it's smaller and the fan is closer to the food, an air fryer is able to focus a high amount of heat onto a relatively small cooking area. Which means that an item of food in that cooking area will cook more quickly than it would in a convection oven.

However, because it is smaller, it will only accommodate a fraction of the amount of food that a convection oven will fit. An air fryer will really only cook about two servings at a time—if that.

This means that if you are trying to feed more than one or two people, you'll have to cook in batches, so that ultimately it may take longer to serve a meal than it would using a convection oven.

This creates a sort of catch-22, since the small size of the basket prevents you from spreading out an even layer of food, so you have to stack your food instead. But by stacking your food, you prevent the hot air from flowing evenly around it, thus defeating the purpose of the convection effect.

Even when used according to the instructions, cooking French fries or onion rings in an air fryer requires you to periodically shake the basket to ensure that all the fries or rings cook evenly. So not only does it take longer to cook (because of having to cook in batches), you also have to physically do more work.

The Pros and Cons of an Air Fryer