All of those are large and deep pans, normally used to prepare meals that are very similar to stews. Most of those meals are cooked slowly too. Slow cooking stews is also something most associated with the Dutch oven.

Disclaimer: As an Amazon Associate I earn from qualifying purchases made on my website. If you make a purchase through links from this website, I may get a small share of the sale from Amazon and other similar affiliate programs.

Why then are all of the above not referred to as Dutch ovens, I hear you ask? The answer to that is the traditional Dutch oven has a cast iron finish to it. Although the evolution of the product in the 20th and 21st centuries has also seen the introduction and popularisation of aluminum and ceramic versions of the Dutch oven.

The former was necessary following the introduction of electric and gas stoves during the last century. Nevertheless, if you are a stickler for this kind of detail, a Dutch oven should only be a cast-iron form of cookware.

Cast iron pots have a carbon content that is greater than two percent. That means they are easy to cast and easy to cut. That is because cast iron has a particularly low melting point.

When Dutch ovens were being developed, Europe and North America were experiencing an Industrial Revolution. Ways were constantly being sought to make production quicker and ultimately cheaper.

Among the people trying to make the production of cookware quicker and cheaper was a gentleman called Abraham Darby. At the time, Darby had effectively done some spying in the Netherlands before he went back to his home in the United Kingdom.

Darby was one of the principal players at the Brass Works Company of Bristol. His mission in the Netherlands was to examine how the Dutch used to make their brass pots.

He then took what he learned and made the trip back to the United Kingdom with a view to helping his company compete with the best in the industry at the time.

People often labor under the misapprehension that beating the competition is only about making a genuinely better product.

While that is sometimes the case, the real skill is finding a way to make an equally good product quicker and at a cheaper rate than the competition.

It was Darby – with the help of his partners – who established that the best way to produce what would go on to be called a Dutch oven was to make a brass mold using cast iron.

Prior to that, the Dutch had been using sand – which was unique in itself. Other cookware makers around the world were using loam and clay at the time.

The trick with the sand that the Dutch were using is that it helped produce a finer finish. So, the key for Darby was to produce an equally fine finish but to also spend less time and money producing that.

It is called a Dutch oven because Darby, who got the patent for casting iron earlier in the 18th century, decided it should be called that.

Ultimately, despite his involvement in the evolution of the Dutch oven, the cast iron process was derived from what cookware experts in the Netherlands were doing.

It Is Definitely Dutch but Why Is It an Oven?

We have already mentioned in a previous blog post (Dutch oven history) that the Dutch oven can essentially be one of three things. 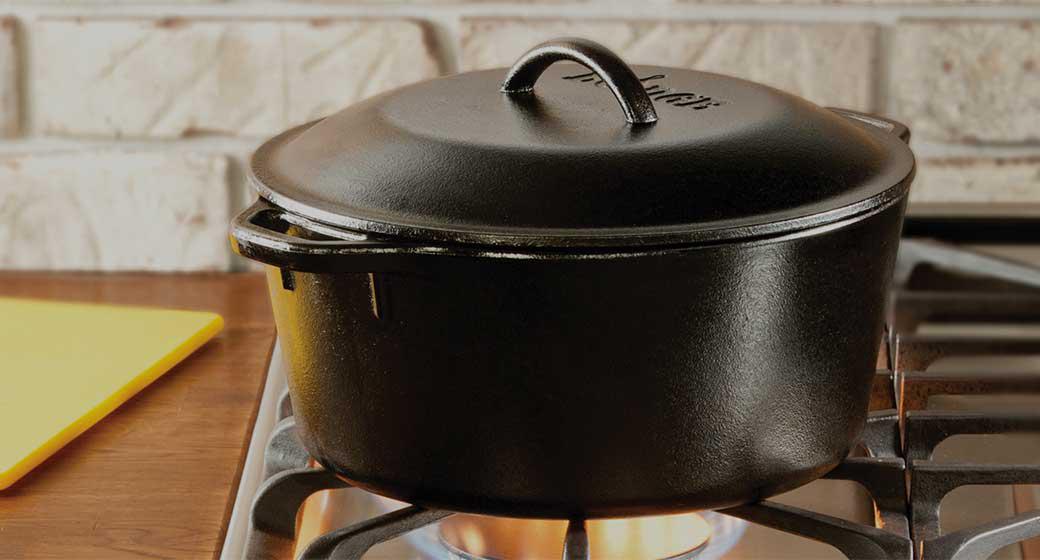 As a quick recap, a Dutch oven can refer to a metal shield for roasting before an open fire, it can be a brick oven that cooks with pre-heated walls, and finally, it can be a cast-iron kettle or pot with a tight and heavy cover. The latter is generally used to cook a meal over an open fire.

The Pot – and even that can come in many shapes and forms – is what most readers of this blog will be familiar with.

The wood-fired oven can be traced as far back as Ancient Greece. It is how traditional cooking has been done for centuries. So, any meal that could be placed before or on an open fire can justifiably be construed as being prepared in an oven.

You need to set aside any 21st-century notions that you have of a pot just being some form of cookware that you prepare food in. When the Dutch oven first emerged, a pot was the oven.

Related reading: When and who invented – Dutch ovens

Spreading the Gospel of the Dutch Oven

While Darby gets a lot of credit for the Dutch oven, it does need to be acknowledged that the Dutch diaspora also has a considerable amount to do with the development of this story.

In fact, it has been argued that they actually had more to do with the pot being called a Dutch oven than Darby did – as plausible and accepted as the Darby story has become.

To a large degree, the existence and evolution of the Dutch oven have become a form of cultural expression, more than anything else. A homage to the pot’s origins.

The descendants of Dutch immigrants have happened to find themselves all over the place, from North America, Africa, other parts of Europe, and finally to Australia.

The Dutch oven features prominently in all of those parts of the globe, where Dutch descendants were involved in a series of mass migrations of some kind.

One of those massive migrations, for example, was taken through the heartland of South Africa in the 19th century. It was conducted by a group of Dutch settlers who went on to be known as the Voortrekkers.

They made the move up North, to resist the British (who had a stronghold in the Cape) but it was a long and arduous journey. South Africa is a larger country than most people care to appreciate.

Having Dutch ovens available to assist with the cooking during overnight stops was a must for the Voortrekkers.

Similar circumstances faced Dutch immigrants in other parts of the world, especially in North America, where they have a distinctly large footprint. Naturally, when settlers travel through a country like this, they will bump into locals or natives, or other cultural groups.

While conflicts do arise, it is also sometimes inevitable that cultural ideas are shared and exchanged between those groups.

There is strong evidence of that with the South African example, where the use of the Potjiekos Pot has become incredibly common among the native tribes of that country, to the extent that one can actually be forgiven for thinking that the Potjiekos was an African invention.

Nevertheless, the ultimate point here is that the Dutch have traveled and settled around the world a considerable amount. Their influence can be felt everywhere and it is also often acknowledged, sometimes praised. A part of that acknowledgment is naming a product after them…like the Dutch oven.

Final Thoughts – Why Is It Called A Dutch Oven and Where Did The Name Come From?

Whichever way you choose to approach this subject, one thing does become abundantly clear. The name Dutch oven ultimately pays homage to the origins of the cooking device – which is the Netherlands.

Whether the Dutch themselves played an active role in building the national institution is neither here nor there. Likewise, it does not matter who patented the product or if an English industrialist decided to name it the Dutch oven.