How To Wear A Sport Coat: Wearing A Sports Jacket With Style

How To Wear A Sport Coat: Wearing A Sports Jacket With Style

What Is A Sport Coat?

A sport coat (or sport jacket) is, for all intents and purposes, any jacket that resembles a suit jacket but is not made with matching trousers. This lack of matching pants is one of the key differentiators between sport coats and suit jackets.

We sometimes use the term “odd jacket” to refer to such a coat. More on the word “odd” as it relates to clothing is below.

Sport coats are typically made in wool, flannel, wide-wale corduroy, cotton, or linen. They can be solid in color but are often made in bolder plaids, windowpanes, and stripes.

Although they look very similar, sport coats and blazers are not the same thing. With that said, one could make the argument that every blazer is a sport coat, but not every sport coat is a blazer.

The difference lies in the history of the two garments and their modern applications.

What Is A Blazer?

In this story, the blazer is based off of the reefer jacket, worn by British sailors in the 1800’s. which is a now-defunct 8×4 double-breasted jacket that hit at the hips.

The classic blazer we now wear that was influenced by this is a 6×2 double-breasted jacket with peaked lapels, side vents and gold buttons. It is said that the term “blazer” is derived from the ship on which the jackets were first worn, the HMS Blazer.

The other story is that the blazer was originally a bright scarlet jacket worn by student members of the Lady Margaret Boat Club at Cambridge University in the late 1880’s. These boating jackets were also made in bright, bold stripes and were referred to as a “blaze” of color.

No matter what creation story you believe, (menswear historian and tailor Alan Flusser claims that the latter story is accurate and that the sobering of the style in the 1930’s brought the comparison to the reefer jacket), it is common nowadays to find a navy blazer in most men’s wardrobes.

They can be single- or double-breasted and may take any kind of metal buttons: gold, silver, pewter, and the like.

Although it is possible to find blazers in bright colors such as green and red, they are far less common than navy. Blazers are typically made of worsted wool, flannel, serge, and hopsack. They fit just as a suit jacket would.

Example of a wind tab on a sport coat

The sport coat, on the other hand, has a history that’s land-based as opposed to water-based. The term derives from the original use of such clothing: they were made for sportsmen in the English countryside: horseback riding, fox hunting, and other stereotypically Anglo-Saxon activities.

The Norfolk jacket is widely considered to be the first sports jacket (more on that specific jacket below).

Though they seem dressy by today’s ultra-casual standards, sport coats are, in fact, casual wear. The odd jacket and trousers combination is a rung or two down the formality ladder from a business suit.

The reason for its casual wear is in the aesthetic details we see on sport coats, such as:

Sport jacketsare offered in a wide variety of colors and patterns. Plaids, windowpanes, bold herringbones, houndstooth, and other such patterns are typical.

As far as material is concerned, sport coats are commonly made in flannel, tweed, cotton, linen, Shetland wool, corduroy, and others.

The terms “single-breasted” and “double-breasted” get used a lot. Just to make sure we’re all on the same page, we’ve outlined the differences below.

Single-breasted jackets have a single row of buttons in front, and the jacket’s front panels do not overlap. This is far and away the more popular jacket model nowadays and has been for about twenty years. 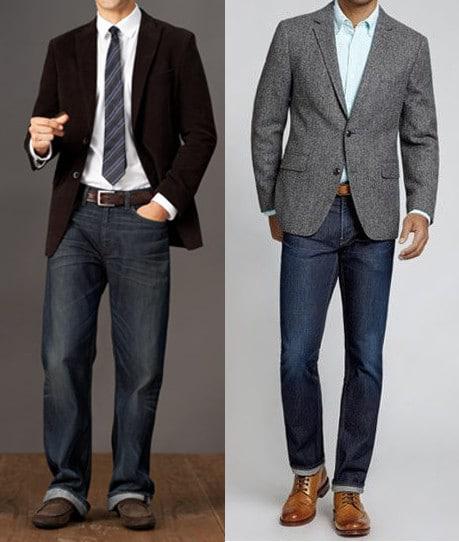 The most common models are 2-button and 3-button. There is a particular style of 3-button jacket called a “three roll two” (written out as “3×2”), in which the lapel is rolled to the middle button as opposed to the top one. The top button is technically functional but not meant to be buttoned on a 3×2; the buttonhole is for show and the top button is hidden behind the lapel. This was common on early American sack suits.

Single-breasted jackets may take any style of lapel: notched, peak, or shawl collar.

Double-breasted coats have two rows of front buttons, the jacket’s front panels overlap, and they never take notch lapels. The last time this model was ubiquitous was in the 1990’s, and those were not well done by any stretch of the imagination.

Still they are a tiny bit dressier than their single-breasted counterparts.

There is a particular four-button double-breasted model referred to as a “Kent,” named for the Duke of Kent, a notable wearer of the style. It’s defined by its longer lapel that rolls to the bottom button as opposed to the top.

How To Wear A Sport Coat

Though they’re relatively simple items, sport coats can present a lot of confusion for men. Below we offer some general tips for wearing sport jackets to full effect.

How To Wear A Sport Coat With Jeans

For men who live a sartorially casual lifestyle, a sport coat with denim is an excellent way to stay comfortable while maintaining a tailored, polished look without overdoing it.

No matter the season, there are two extremely important criteria that your jeans must meet:

There’s conflicting opinion as to whether or not your jeans must be dark in shade to be paired with a sport coat. While we certainly agree that dark jeans are always a smart move with a sports jacket, it’s not necessary for your jeans to be dark for the look to work.

Light denim works well in spring and summer, grey denim pairs wonderfully with navy sport coats that would otherwise look off with dark denim, and so on.

There’s a formality continuum with the denim-and-sport-coat ensemble. At its most formal, it involves dark denim with a tie, a dress shirt, and dressy shoes. At its least formal, it can be light denim, cotton jacket, lightweight sweater, and moccasins with no socks.

A great day-to-day middle ground is sport coat, denim, brogues or boots, and a dress shirt.

Finally, we would recommend that you wear a belt with your jeans. Not only does a belt help break up your outfit, its absence will make the belt loops appear empty.

Sport coats and blazers with non-matching slacks is a classic sartorial trope referred to as an “odd jacket and trousers.” In the menswear world, “odd” refers to any jacket, trouser, or waistcoat that doesn’t have matching garments. You can wear a suit with an odd vest, for example.

This allows the viewer to see that you are clearly not wearing a suit, whereas a low contrast combination would make you look as if you tried to cobble a suit together from mismatched items.

It’s also important to contrast patterns. A surefire way to look good is to make either jacket or trousers patterned, while the other stays solid. More often that not, the jacket will be patterned while the trousers are solid.

Odd jackets and trousers look particularly good on tall men, as they break up height.

There are many different styles of sport coats, all with differing formality levels. Listed from dressiest to least dressy, here are some of the most common styles.

The blazer is the most formal of all the non-suit jacket jackets. When structured in the shoulder, they’ll have a greater level of formality. However, unstructured blazers that don’t provide padding are more casual.

The hacking jacket is really what most sport coats today are based on. “Hacking” is a British English term for “riding,” and these jackets were made specifically for equestrian endeavors.

They were cut a bit longer than normal and have slanting pockets (also known as “hacking pockets”) so that supplies could be easily reached by a rider while on horseback.

Other than that, they generally resemble suit jackets in cut and style and are a step below blazers in formality.

A belted back on a Norfolk-style sport coat

The Norfolk jacket is widely considered to be the first sport jacket.

Originally paired with trousers to create what one could call a sport suit, the Norfolk jacket has box pleats in the front and back, a yoke, and and an all-around or half belt.

It was first designed as a shooting coat that wouldn’t bind as the elbow was raised to fire, it’s a very informal coat compared to other jackets.

Made popular by Edward VII in the mid-1800s (at that time he was the Prince of Wales), it is a rarity nowadays.

The name comes from either the Duke of Norfolk or the county of Norfolk in eastern England; the historical record isn’t clear.

A good sport coat or two are key wardrobe pieces that any man can turn into workhorses if his lifestyle allows. Start with a solid grey, blue, or brown for maximum versatility, and build your collection from there.

Where To Buy The Best Sport Coats

Looking to equip your wardrobe with some quality sport coats? We recommend the following top 10 brands for finding the best sport coats:

If you have any favourite brands that you believe are worth featuring, feel free to leave us a comment!

Now you have read our detailed shirt guide, you should be better informed on how to choose the right one for you. If you still have any questions, feel free to leave us a comment! If not, we have more resources at your disposal: